2017 and 2018 future conference in the Pinakothek der Moderne, Togetthere-Xperience, Conference on the social issues of our time, co-founder, over 7,000 visitors, extensive coverage

2000ff student film competition for the first European media facade, the media facade Vattenfall Europe in Berlin, at board level and in cooperation with the Film University Babelsberg Konrad Wolf in Potsdam, received widespread attention

Our specialty are tailor-made, new formats. 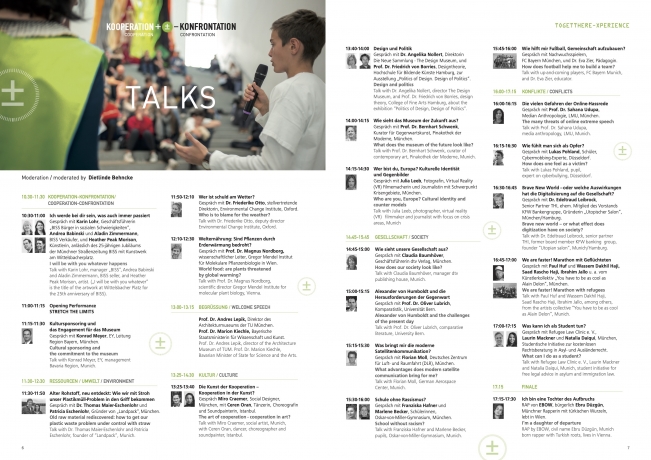 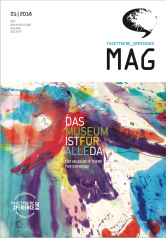 FUTURE IN THE MUSEUM: NEW, YOUNG AUDIENCE AND MUNICH CITIZENS AT TOGETTHERE-XPERIENCE ON SEPTEMBER 16 IN THE PINAKOTHEK DER MODERNE On September 16, 2018, the second "Togetthere-Xperience" took place in the Pinakothek der Moderne on Sunday with new groups of visitors and many young visitors. The Bavarian State Ministry for Science and Art supported the goal of the day “The museum is there for everyone” with free admission. Under the direction of Dietlinde Behncke and Miro Craemer, many parallel, low-threshold offers encouraged participation and thought-provoking. The four museums in the Pinakothek der Moderne were relaxed, young, lively on this day and the visitors welcomed this “completely different” future place of community, participation and social responsibility very well. The first program item WE ARE ONE in cooperation with “BISS Citizens in Social Difficulties” brought many new visitors to the museum. The general public came among others through the interactive sound performance STRETCH THE LIMITS, ART NOW or the young dance from LAB NOW! in lively contact with the collections and individual exhibits. The big TALK MARATHON with over 25 international speakers between 10 and 70 years of age on society, bullying, culture, the environment or digitization covered the current issues of our time. Finally, EBOW, a rapper from Munich, performed on the topic of “defeating borders”. Clip see here.

Dr. Angelika Nollert, Director Die Neue Sammlung - The Design Museum: “It is very important to us to invite visitors of all ages and backgrounds to the Pinakothek der Moderne with our exhibitions, activities and new formats such as TOGETTHERE-XPERIENCE and to see art, architecture, Design, graphics to discover. " 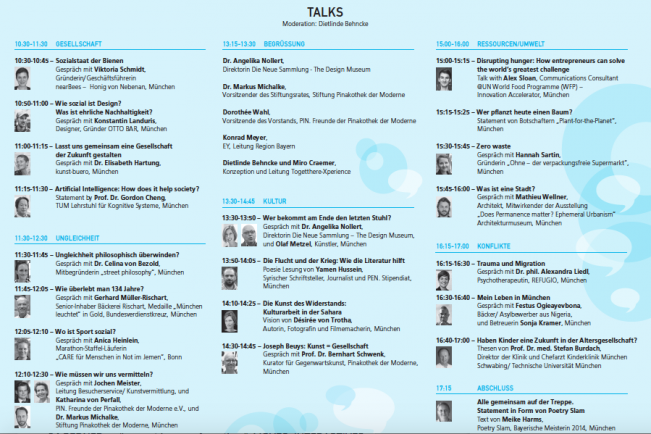 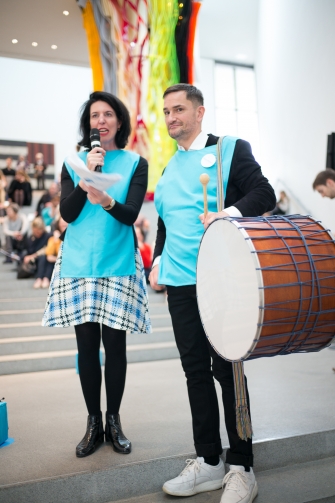 FUTURE CONFERENCE FOR THE MUSEUM'S 15TH ANNIVERSARY October 8, 2017, PINAKOTHEK DER MODERNE, with 7,200 VISITORS AT TOGETTHERE_XPERIENCE The completely new event concept and the overall conceptual and visual image appealed to a wide audience in many ways. The concept was called "participation", i.e. the audience was involved on an emotional AND intellectual level. And it was called "hospitality". On the one hand, the audience was enthusiastic about the variety of activities in all four museums in the house. On the other hand, many visitors followed the individual program items devised and organized by Dietlinde Behncke and Miro Craemer with great concentration and for a longer period of time. HIGH WIRE showed, among other things, that community can carry the individual: many visitors pulled on ropes that ultimately carried a person in the middle. The ART POINTS with actors around the director Matthias Beier enabled a dialogue on selected exhibits from the four collections. In cooperation with the Otto Falckenberg School, an interactive homage to Joseph Beuys and his “honey pump at work” took place. At the THINK-TANK-MARATHON on the grand staircase, the presenter Dietlinde Behncke gathered 28 speakers from 10 to 70 years old with short statements on five major social issues of our time - "Society", "Inequality", "Culture", "Environment / Resource" , "Conflict". In the style of a TED conference, international social start-ups such as Alex Sloan (UN World Food Program - Innovation Accelerator), researchers such as Prof. Stefan Burdach (Director Children's Hospital Munich), artists and authors, such as Yamen Hussein (PEN. Scholarship holder), also discussed “ideas worth spreading” in conversation with visitors. Prof. Gordon Cheng (TUM, Chair for Cognitive Systems / Artificial Intelligence) named the unique situation: “What ultimately distinguishes humans from robots is their humanity, their creativity. That is why we are sitting here in one of the most important museums in the world, under Olaf Metzel's “Journey to Jerusalem”. ”At the end, Maike Harms, Bavarian poetry slam master, performed the PUBLIC STATEMENT entitled“ MUT ”in front of a visibly moved audience, here.

In order to improve communications of the company we designed and organised a competition for Vattenfall Europe Medienfassade themed "Art and Technology". Vattenfall Europe, third-largest energy supply company in Germany, was first in Europe to get involved in innovative media art with its 100 sqm outdoor media facade. We arranged a cooperation between Vattenfall Europe and the HFF Film school, Potsdam and the Filmakademie Ludwigsburg. We supervised every stage of the competition for which the participating teams, HFF students as well as students of the Filmakademie Ludwigsburg of film-directing, camera, stage-design and animation had to submit their projects. Finally, we organised the ceremonial premiere at the opening of the "Long Night of the Museums" for Vattenfall Europe.

The Vattenfall Europe Medienfassade in Berlin was awarded with the „Honor Award“ of the Society for Environmental Graphic Design and the „DuPont Benedictus Awards“.